It’s funny, and it makes you think.

Tired of reading about SCOTUS? I am. So I play games instead. But not a bunch this week END_OF_DOCUMENT_TOKEN_TO_BE_REPLACED

So it looks like FFG and Stronghold have come to an agreement about the future of Merchant of Venus. The two publishers are essentially going in together, each publishing their version of the Avalon Hill classic in the same box. One side of the board will have FFG’s re-imagined version, and the other will have the game as it was originally designed by Richard Hamblin. You can check out the full song and dance over at FFG’s website.

The double-version of the game will necessitate a higher price, but I can live with that for what is likely to be the definitive version of this game. This could have been a very ugly situation, but it looks like both companies thought it best to take the high road and work together to produce what should be something that’s very special.

It also signals what could be a pattern for Fantasy Flight, who are usually associated with reprints that change way too much. Wiz-War’s release earlier this year showed that they could tweak stuff and still leave the original rules as an option. Hopefully this development marks a pattern for them, because they have great resources for bringing old classics to print.

As for Stronghold, it would seem that they are way sharper on the business end than I might have given them credit for. They aren’t some fly-by-night publisher who is looking to just publish vanity projects: they are now a force to be reckoned with. That’s especially true if, as expected, they eventually announce a reprint of another Richard Hamblen classic: Magic Realm.

Whatever the case, I’ll be anxiously awaiting the new version this fall.

Don’t cross the Cyborg. He will mess you up.

What do we want from expansions? There are the ones that simply add extra pieces for more players. Some games satisfy themselves with extra maps or scenarios. Others have figured out that if they have enough fans, they can make them purchase something every six months or so. And that doesn’t come close to covering the legion of collectible and expandable games out there that explicitly build constant expansions into their business models. But my favorite kind of expansions are the ones that add new options to the game that it expands. If I really like a game, I’m ready for a new way to play. And the undisputed king of that last kind of expansion, for good or for ill, is Fantasy Flight Games. END_OF_DOCUMENT_TOKEN_TO_BE_REPLACED

Two weeks in a row with a baby image, but this one is almost autobiographical for me.

Not a lot of gaming this week, or much else for that matter. Sometimes stuff just get’s busy, you know? END_OF_DOCUMENT_TOKEN_TO_BE_REPLACED

At some point in the last 50 years, “fantasy” came to denote a certain image: elves, dwarves, and wizards who embark on a quest and have lots of big adventures. There’s a certain epic sweep to fantasy, but at its core it tends to be pulpy. That basic silliness must be overcome or cast aside for a fantasy novel to really shine. The exception to this goofy nature is what most people would consider the first true modern fantasy novel, The Lord of the Rings. Tolkien’s classic may have many similar trappings, but its attitude is entirely different. Instead of action there are journeys. The tone is lyrical and elegiac, rather than fast-paced. As such, some modern readers find The Lord of the Rings to be curiously slow. It’s not a book that is meant to be burned through. It demands something from the reader. END_OF_DOCUMENT_TOKEN_TO_BE_REPLACED

They only look cute until you cross them.

Another week in the books. Mine’s been unusually busy. END_OF_DOCUMENT_TOKEN_TO_BE_REPLACED

So hey, there’s some pretty big news on my front. If you follow me on Twitter you already know this, but I have been asked to join Fortress: Ameritrash as a weekly columnist and staff member. It’s a great honor to get to join with some of the finest board game writers on the internet. Matt Thrower, Michael Barnes, and Matt Drake are among my favorite voices in the industry, and right alongside them you’ll see me, Nate Owens. Monday’s article, about the missing history of board gaming, was published to the front page yesterday. I’ll be there every Wednesday morning. END_OF_DOCUMENT_TOKEN_TO_BE_REPLACED

These are apparently the rules of Magic Realm.

When I was in college, I discovered Roger Ebert’s series about “The Great Movies.” For the past 10-15 years, Ebert has been steadily releasing essays on films that he considers to be particularly entertaining, moving, or otherwise significant. There are several hundred essays collected now, including such varying subjects as Lawrence of Arabia, Groundhog Day, and Goldfinger. Say what you will about Ebert as a critic, but his command of language is remarkable. His gifts are best used in this context, where he doesn’t need to say whether a movie is worth paying to see, but rather he can focus on the details of what brings greatness. He’s a good candidate to write such essays as well, simply because of how many films he has seen. END_OF_DOCUMENT_TOKEN_TO_BE_REPLACED

True story: I spend more time finding an image than I do writing this weekly article.

Good Friday to you all. Well, not Good Friday. Happy Friday? Isn’t that redundant? END_OF_DOCUMENT_TOKEN_TO_BE_REPLACED 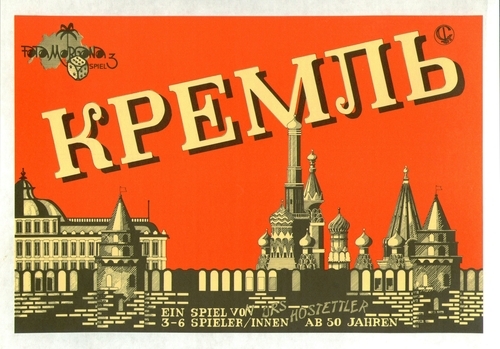 That designer? He also designed Tichu. Clearly an awesome Commie.

So there’s this game called Kremlin, okay? The object is to assign influence to different members of the Communist party in the USSR. Through bluffing, trickery, and good old-fashioned brute force, you will try to get your man in the position of party chair, and get him to wave at the yearly parade. It’s a fun game that’s made even better because of it’s thick theme and setting. Party members age and get sick, and if they’re really troublesome you can purge them and send them to Siberia. It’s pretty great how the game puts you in the proper mindset so effortlessly. END_OF_DOCUMENT_TOKEN_TO_BE_REPLACED