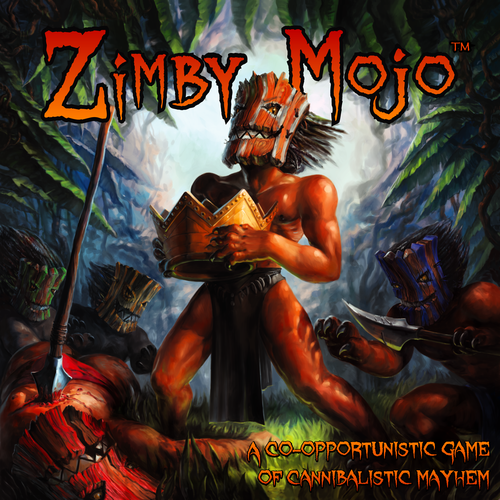 There is an assumption that if a game is chaotic and wild, it is inherently dumb and silly. That’s not an unfair assumption, because it’s almost always the case. But there have been a few games that look in the face of chaos and force players to roll with it, to create contingencies and take risks that won’t necessarily pay off, but are still necessary. Strategy games almost always tempt players to find a sure thing, and when sure things don’t exist players inevitably will complain that the game is random, or unbalanced, or something like that. But a few games have soared precisely because they force players to surf the waves of chaos, rewarding the players who do so boldly and effectively. Cosmic Encounter does it, Dune does it, and Zimby Mojo does it. It’s a huge beast of a game, one with a bizarre premise and a ton of rules, but as I kept at it I found it more and more rewarding, both in the memorable sessions it produced and in the surprising nuance found in its strategy.

Designer Jim Felli, who previously gave us Shadows of Malice and its expansion, deserves credit for creating an utterly original concept, and being able to sell it throughout the design. The players are all zimby shamans, a zimby being a small nasty cannibalistic creature. The shamans control tribes, and all of the tribes want to defeat the Zimby king, who has a crown that everyone wants. The problem is that the king is very well-guarded and strong in combat, so the players will need to create loose partnerships to bring him down. This takes the form of stacking zimby tokens together to create columns, which can then work better in combat and move on more turns.

This sense of collaboration is basically necessary, and it is woven into every aspect of the design. Most things in this game are just easier with other people, though it’s possible to do it alone. It also comes into play once the king is dead, because the way to win is to take the now fallen crown back to a tribe’s board. Only one player can win, and so what began as a largely cooperative effort to take down the king becomes a far more cutthroat affair. There are still lots of deals to be made, but now the understanding is that when the crown is loose someone will kick someone else to the curb. It is here that the cards, representing magic scrolls, become most prominent, forcing the players to set themselves up and time things just perfectly so as to take advantage of the situation when necessary.

Movement and cardplay is managed by a system of action points the game calls mojo. Every player has four on each turn, but any unused zimbies in a tribal camp can be depleted to create more mojo, giving more flexibility. Of course those zimbies might be needed elsewhere, which means new ones need to be brought into the tribal board to keep the mojo flowin’. This is a pivotal part of the game. I can’t tell you how many times a player would make a big push and then fail to shore up their supplies of zimbies, only to find themselves with no zimbies on the board and very little mojo to work with, forcing a long rebuilding process.

The other key system is the cards themselves, which have a variety of effects. Some of those effects look daunting at first, and I’d be lying if I said I didn’t sometimes discard something because I didn’t feel like parsing out the text. Not that the cards are vague, but they are detailed. Those who played Shadows of Malice will remember Felli’s penchant for weird die rolls, like having a player roll 2d3. Combined with the need to actually physically have zimbies in certain places at certain times, this means that really using the cards well is a learned skill, not something that happens right away.

If all of this sounds like a big insane mess, it absolutely is. The second act in particular is filled with swings of fortune, wild reversals, unexpected windfalls, and good old-fashioned dirty tricks. Players spend the whole game making and breaking deals at convenience. It’s entirely possible that the crown can end up in the hands of six different players in a single round. That’s to say nothing of the board itself, which funnels players into the paths of oncoming thugs, contains magic portals that bamf a player across the board, and can be manipulated by player-placed obstacles. It resembles a more gamer-friendly version of Wiz-War, Tom Jolly’s wacky game of wizard duels that might be the best beer-and-pretzels game ever.

That’s not a bad comparison for Zimby Mojo, but it’s a misleading one, because Zimby Mojo is not a beer-and-pretzels game. It’s definitely a strategy one, but one where plans often fail spectacularly. That means the player needs to think creatively about their cards and manage their mojo effectively to come up with a new plan in a hurry. It’s not exactly chess, but it is a far cry from the goof-off game it appears to be at first blush.

The complexity is considerable, but it’s important to point out that it internalizes easier than you’d expect. The players are able to intuitively understand the kinds of things they are required to do, even if they don’t completely understand how the game will allow them to do it right away. Both failure and success are entertaining, and it results in some terrific moments of fist-pumping and schadenfreude.

Framed that way, some of its shortcomings begin to feel more like features than bugs. This is not a short game, especially when players are learning it. There are a ton of rules to digest and not many frames of reference from other games to help. The cards are pretty detailed, and conservative play and bad luck can create trench warfare situations now and then. Even with experience, it floats around a half hour per player. That’s not so bad with 3 or 4, but it’s more than many players will want to handle with 8. (Yes, it goes up to eight players.) Played like a late-night goof game it can feel very drawn-out.

If it feels like I’m spending a lot of time explaining the right way for people to think about this game, that’s not my intent. Lots of players will look at this game and decide its an overlong chaotic trainwreck. But peeling back the layers begins to show a game with surprising nuance, a kind of calculated chaos that is surprisingly crunchy if the players will take the time to dig in. Like Shadows of Malice, it feels like a design that would have been right at home in the 1980s in an Avalon Hill catalog. It’s a wild, frantic design that still manages to be substantive.

I also want to praise the production, which continues Felli’s embrace of old-school aesthetics. The board itself looks a lot like a Parcheesi board, or something similar. It’s just plain squares in a complex pattern, and the tokens are all wooden discs with simple cartoony faces. The cover and rulebook is far more evocative, and the illustrations are outstanding, but mostly the game deals in abstract gamey graphics and simple iconic images. I actually really like the look and production here. It makes the board much easier to read, and the zimby icon is the sort of thing that fans 20 years from now might use as their avatars, much like the X’ulthul icon in Shadows of Malice. Like that game, a lot of players won’t be into the look here, but this is an easier game to get into visually.

I’ve mentioned Shadows of Malice a few times, because Zimby Mojo is so obviously a product of the same demented mind. As refreshing and bold as that game was, this one is the better design. It forges its own territory, but for all of its rules detail and chaos it is actually the more accessible game. It’s easier for player to get into, even while rules are still kind of hazy. Still it is not a game for everyone, least of all modern gamers who want their games to be over in a reliable timeframe and don’t have the patience for a ruleset that will take a few games to internalize. Rather, Jim Felli is following the path forged by the amazing designers at Future Pastimes. He’s looking at games and wondering why they have to follow conventional wisdom. It worked before, and it works even better here. This is one of the best games of 2016.