It is always surprising to find a game that redefines a genre. Until a year or so ago I had assumed that worker placement, as a mechanic, was about as played out as it could be. It’s a genre I happen to enjoy, but it was the sort of thing where you could find your favorite and stick with it, knowing that new games probably won’t change your opinion that much. But it was about a year ago that I played Argent: The Consortium for the first time, and it has forced me to rethink everything I thought I knew about worker placement. It represents the biggest leap forward in that genre since Agricola, as well as a new high watermark in Euro-style game design.

The first refreshing thing about Argent is its setting. The players are in Argent University, a magical school where students learn the finer points of sorcery, interdimensional travel, and mysticism. The position of school chancellor has opened up, and the various deans and administrators of the school are all vying for the top job. But the candidates will need to convince the school board, the Consortium, to cast their votes favorably. Each Consortium member has a different standard for their votes. One member likes the person with the most gold, another might want someone with the most emphasis in a particular school of magic. The exact makeup of the Consortium is hidden at the beginning of the game, so the players will have to spend actions to learn how the various members will vote, and then jockey for position to secure enough votes to get the big job after five rounds. So much of the magic of Argent depends on this setting. It feels very fresh, and it clearly drove the design process from the very beginning. It’ll appeal to anyone who has ever read Harry Potter, Patrick Rothfuss’s Kingkiller Chronicles, or Lev Grossman’s The Magicians. 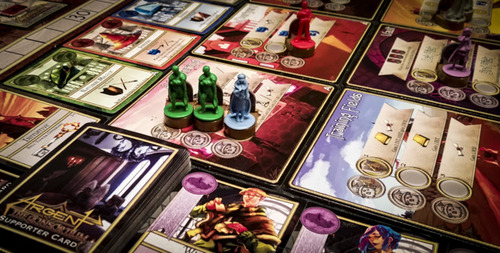 This competition for votes is probably the most innovative element in Argent’s design. There is no victory point track, and it’s impossible to tell at any time who is closest to winning. It all comes down to who has the votes, and it is complicated by the fact that there are a lot of different members who can be used in any given game. The guy who likes the most mana might not actually be in the game, so that pile of blue gems might not matter in the end. There is a track for the players’ influence, but this is used mostly as a tie-breaker. It’s an important element, since there are a lot of ties, but in the end the votes are all that matter.

Nailing down those votes is where the meat of the game takes place, and although Argent has a simple structure there are a huge number of considerations in every turn. The university is always composed of a number of rooms, depending on the player count. You send your mages to those rooms to get different resources, spells, magic objects, and supporters. Those mages aren’t just generic workers, but rather students of different subjects in the school. That means they all have special powers to break the rules. Red mages can wound other mages and take their spots. Blue and green mages can defend themselves from spells and wounding, respectively. Purple mages can be placed as a “fast action,” allowing the players to essentially take two turns at once, and so on. Instead of placing a mage, players can also utilize the powers granted by their spells and magic objects. Finally, the players can also take a Bell Tower card, little one time advantages that also act as a round timer. When the last Bell Tower card is gone, the round is over and all of the rooms are resolved.

The interactions between the rooms, the various cards, the mage powers, and the Bell Tower cards makes for a very complex decision tree. To be sure, there is a huge amount of game here, both strategically and physically. Argent will demand the biggest table you can spare, and the first few games will be overwhelming. While the rules themselves are surprisingly lean, the interaction of all of the card effects alone will drastically affect how the players make their moves. Whether all of this is too much will depend on the player. There’s a good chance it could have been cleaned up a bit, but then it would not be the same experience. The sheer wooliness of the experience is part of its charm. 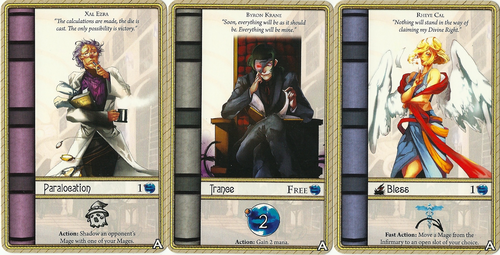 Complicating these decisions is the ridiculous amount of variety built into the design. Every room is double-sided, allowing for so many possible setups that players will literally be seeing new combinations for dozens of games. Each mage color also has an alternate power, giving the players enormous flexibility to create the experience they want. This variability can create some wildly different experiences from game to game. My most recent game was incredibly tight on ways to make gold, but it was very easy to get mana. This created its own experience, one that forced the players to figure out new ways to get the job done. There’s also a big expansion for the game, Mancers of the University, which throws more of everything into the mix, including a new mage type. One would think all of the variety would sometimes devolve into setups that just don’t work, but its obvious that great care has been put into assuring this won’t happen. It’s an absurdly generous design, one that can stay with players for years.

Worker placement tends to be a somewhat white-gloved mechanic, a way for players to interact without actually interacting. Argent throws this right out the window. There are numerous ways to remove mages, attack people, shift the board state, and generally make chaos. This interaction will be the first thing most people will notice, because it feels the most different from how worker placement normally plays. The impressive thing here is that while it might feel cutthroat to other players, this vicious edge is actually managed quite tightly. First of all, it’s hard to just be an agent of chaos, since there is almost always an opportunity and resource cost for doing so. Secondly, it’s not usually a problem to go somewhere else, or to just accept the game’s consolation prize for getting zapped. Indeed, I recently played a game where a player kept zapping his own mages so they could be sent to the infirmary and generate a particularly tight resource. Games like this have struggled with meaningful interaction for years, either ignoring it all together or wielding it like a blunt weapon. Argent finds this balance surprisingly well, giving players lots of options to affect other players, but giving those other players a lot of ways to respond, all while keeping the structure of the game intact. It’s like a strange combination of Caylus and Wiz-War, and it works very well.

It is rare for a single game to wrap all of these qualities into a single box, but Argent pulls it off. It has a strong setting, extraordinary depth and variety, and constant interaction. Rather than the ungainly monster it could have been, it actually combines into an outstanding game. To be sure, it’s not going to work for everyone. It can run pretty long, at least a half-hour per player. I’ve played with a full six players (using the expansion), and while I loved it, the whole thing was more massive than some people will like. It also has some frustrating component choice, particularly the mages themselves, which don’t always stay in their bases, and the red and orange player colors, which look way too similar. And a lot of players will just be turned off by the game itself. It is indeed massive, with lots of special card powers that are impossible to take in. I’m comfortable just not knowing everything on the table, but many players won’t like that. Whatever else it is, Argent is not at all a tidy experience, and anyone who desires discipline in game design will be frustrated. There’s also the interaction of course. I’ve read reviews making it sound like the game is some kind of bloodbath, but it didn’t strike me that way, at least not when compared to lots of other games centered around conflict. But it’s definitely a lot for a heavy Euro design, which is clearly what this is, and that just won’t work for some people.

I’m not sure Argent will ever be more than a cult hit. It’s too enormous and too much of its own thing to really be a game-changer in that sense. But what it does is redefine what is possible in the field of heavy Eurogames. We don’t have to be satisfied with blank efficiency engines that let the players stay at arms’ length from each other. Even players who really enjoy games like that might well find Argent a breath of fresh air. I’ve been playing for a year, and it still manages to surprise me. It is one of the most impressive games of the last few years.

edit: I stated that a player received a reward after sending his own mages to the infirmary. This is actually against the rules. A player can wound their own mages, but they receive no compensation from the infirmary for it.