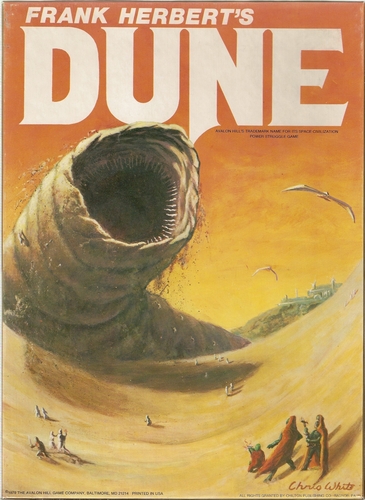 Unlike a lot of other pillars of nerd culture, Frank Herbert’s classic novel Dune is still waiting for its perfect adaptation. The 1984 David Lynch film is slog with amazing art direction, and the Sci-Fi channel miniseries reduced the scope of the novel lower than it could really bear. But if we expand the search to include other media, Dune has received two of the most important games of the last forty years. Westwood Studios’ Dune II: The Building of a Dynasty essentially codified real-time strategy games in the video game world. But Dune’s greatest adaptation might just be Dune the board game, published by Avalon Hill in 1979. END_OF_DOCUMENT_TOKEN_TO_BE_REPLACED

Many board gaming hobbyists have a story of how a rare game just kind of fell in their lap. I know a couple people who found complete copies of Dune in thrift stores. One friend of mine had a copy of Star Wars: The Queen’s Gambit literally given to him by someone who found it in their garage. While I’ve never had anything quite that lucky, I did end up with a copy of Star Wars: Epic Duels for a mere $35, which is a far cry from the prices that game commands today. I’m glad I have it too, because it’s a lean, fun action game, exactly what a Star Wars game should be. END_OF_DOCUMENT_TOKEN_TO_BE_REPLACED

One of the side-products of not writing a weekly column anymore is that I don’t really need to sit down and figure out my five best games of the year like I’ve done in the past. That’s a shame, because my work with Miniature Market has allowed me to cover far more new games than I would otherwise play. Now that 2015 is in the books I thought it might be a good time to dust off the ol’ blog and talk about what I thought were the best releases of the year. END_OF_DOCUMENT_TOKEN_TO_BE_REPLACED

Although I spend a lot of time writing about old games, I’ve put off writing about Ra for a long time. This is because, unlike most of my favorite games, I struggled for a long time to put my finger exactly on what I love so much about Ra. Reiner Knizia’s classic was one of the first games I bought when I started collecting games, and over all those years I’ve always had a hard time defining why it works so well. END_OF_DOCUMENT_TOKEN_TO_BE_REPLACED

Playing Acquire is a little like meeting a fifty-year-old man who can outrun a bunch of twenty-somethings. Rather than showing its age, Sid Sackson’s classic feels as relevant today as ever. It’s a true evergreen title, one that has seen numerous publishers but has remained essentially unchanged since 1964. It’s one of only two hobby games, along with Settlers of Catan, that I can set up with just about any gaming group and never have to explain. I only ever have to teach it to people who don’t usually play games, and even then it’s intuitive enough to pick up quickly and challenging enough to entertain after decades. END_OF_DOCUMENT_TOKEN_TO_BE_REPLACED

Begin the litanies of hatred.

Since I’ve been in the hobby, I don’t think there’s been an event quite like the 2009 release of the 3rd edition of Space Hulk. There was a lot about it that we may never see again. It was before every classic from the 1980s was getting a major reprint, before Kickstarter created dozens of miniatures games that cost over $100. It was wholly unexpected and at that point arguably the biggest hobby board game release ever. And for the hobbyist sector, it had a bizarre and far-reaching response within the online community. A concerted effort by the game’s fans pushed the game into the BGG Top Ten, which evidently alerted Games Workshop to the presence of fan material on the website and resulted in a spate of C&D letters. Hundreds of users protested by adjusting their rating Space Hulk a “1,” which prompted a backlash-backlash of people who now rated the game a “10” on principle. It was staggering in its absurdity, and was exacerbated by the fact that Space Hulk vanished from store shelves in a matter of weeks, scooped up by scalpers and eager fans who hadn’t seen the game at retail in 15 years. It was assumed it would be years before another edition was produced, until just last week when Games Workshop announced an expanded version of the 3rd edition. END_OF_DOCUMENT_TOKEN_TO_BE_REPLACED

When I write about older games I try to find one that a lot of people have played, or maybe one that could be considered a classic. By that standard, Felix: The Cat In The Sack seems awfully slight. It’s a little 30-minute trifle by Friedemann Friese, who is much better known for his bigger designs like Power Grid. It was well-regarded when it came out several years ago, but like a lot of minor hits from that time period it’s been passed by in an age of deckbuilders and crowdfunding. Still it’s proven to be something of a gem in my collection, a short auction game that felt unique at the time and still does. And more than most games, it makes me laugh. END_OF_DOCUMENT_TOKEN_TO_BE_REPLACED